New Cyprus Museum design by XZA Architects won the 1st prize of 2-phase International Architectural Competition held on 2017. The new museum will host one of the largest collections of Cypriot archeology, projecting the history and the culture of Cyprus into international scope. The intention for highlighting the archeological finds from the excavation and the past to the light and the present time, led to elevate the museum, thus allowing for the ground level to remain free and be formed with various qualities. The upper zone, the Memory layer, corresponds to the hovering body of the museum. The intermediate zone, the City layer, welcomes the city, while the lower zone – the River layer –hosts everyday functions, is organized around the museum’s atriums and extends to the new park of Pedios river.

The site of the project is located in close proximity to the medieval city walls, in the Civic and Cultural Center of Nicosia, Cyprus capital. Pediaios river is on the west of the site, while the three main traffic corridors encircling the plot, Tziabacharlar Nechrou Street on the north, Cheilonos Street on the south and Stylianou Lena Square Mouseiou Street on the east, provide vehicular access to the New Museum. Plot surface is 42.000 m2, while the total surface of the new building amounts to 41.000 m2 and will be built in two construction phases. The new museum will host permanent and periodical exhibitions, will be able to accommodate performances by artists, educational programmes, formal and informal events and activities. It will include exhibition spaces, library, personnel areas (offices of administration and support staff of the museum), laboratories, store rooms, educational areas, restaurant – cafeteria, gift-shops as well as parking areas aiming to serve the visitors and the staff both of the Museum and of the Department of Antiquities. There will be two parking areas: in Phase A parking area (open air and underground) will accommodate up to 170 private vehicles, 10 buses, 5 taxis and 50 motorcycles / bicycles, while in Phase B there will be an underground parking of 200 private vehicles. Access, manoeuvering area for supply / service vehicles as well as loading / unloading area for trucks will be provided at the underground level of laboratories. 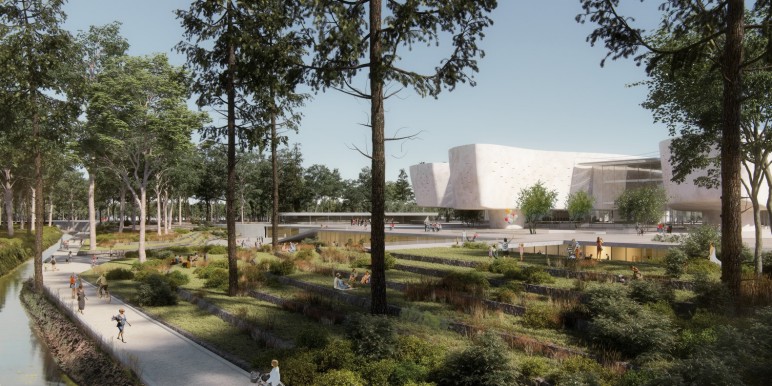