The project referred to the Integrated Rehabilitation of Faliro Bay, which is situated in the southwest coastal front of the Athens’ basin. The project, according to the Pre-study of the Concept Masterplan of the Renzo Piano Atelier, included:

The realignment / adjustment of technical infrastructure and mainly of the transport infrastructure of the costal zone, in order to ensure an optimized level of traffic service, accessibility to the rehabilitation area and internal mobility in the park, within the context of an integrated transport system that includes bicycle and pedestrian ways, which ensure an unobstructed and harmonic continuity of the city and the coastal zone.

The realignment of the coastal motorway between Syngrou IC and Faliro IC by the means of horizontal shifting towards the coast, degrading and segmental coverage along with crossing bridges that will restore the connection between the urban tissue and the coastal front, reconfiguration and adjustment of bilateral Syngrou IC and Faliro IC, realignment of the urban coastal expressway

Construction phasing under operation of motorway, expressway and tramway line along with the design of respective intermediate transport infrastructure configuration. 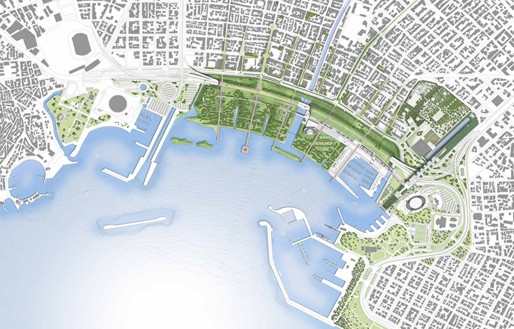