Detailed Design of Railway Line Durres – Tirana Public Transport Terminal (PTT) and of the new railway connection to Rinas Airport (TIA) and of the restoration of service roads and of local – rural road network and Financial / Economic Appraisal of the whole Albanian Railway Network, 420 km (796)

The overall objective of the project has been to revitalize the Albanian railways and enhance railway transport by improving railway infrastructure and operations and securing safety and interoperability, while at the same time enhancing the capacity of HSH and MTI to manage the revitalized railways. There are two specific objectives.

The first objective is to upgrade the existing railway line of Durres-Tirana Public Transport Terminal (PTT) and to develop the new rail link of Tirana International Airport (Rinas) airport by means of preparing a detailed design of tracks including structures along the mainline and at stations as well as detailed specifications for signalling-telecommunications.  Inherent part of the design is the network of service roads and the restoration of local – rural road network following the fencing of the railway corridor and the elimination of arbitrary level crossings.

The second objective is the provision of a rational prioritization of the existing rail lines of the basic network through a comprehensive financial and economic appraisal that will allow the further investment in railways in the medium and long run. The aim has been the provision of a justified rational investment programme for railway network improvements.

An additional objective has been the building of capacity of HSH and MTI through the transfer of knowledge and skills. The main knowledge transfer is to provide guidance on financial/economic appraisals, on interoperability and European standards, on designing modern railway systems (especially on ETCS) and on preparing tender documents in a transparent and efficient manner.

The transfer of knowledge is implemented through the execution of a number of workshops attended by pertinent personnel of HSH and MTI during the execution and after the completion of the study.

Along with planning for the rehabilitation of the Durrës – Tirana railway line and the development of a new railway link to connect the Tirana International Airport, a new transport terminal (Tirana Public Transport Terminal (PTT)) was planned by the Municipality of Tirana at a distance of approx. 4km from the “historic” Tirana terminal railway station. Located at the outskirts of the CBD, the new Tirana PTT is scheduled to operate as a metropolitan transfer terminal accommodating the terminal stations of the railway line, the urban and interurban bus lines and the future / planned Tirana tramway network.

In View of the development of the new Tirana PTT the 4km section of the Durrës – Tirana railway line post the PTT and until the historic city railway terminal was abandoned. The old central railway terminal station building was demolished while the final 1.5km of the line, along with the terminal station (lines, platforms, yard etc) yard gave way to urban rehabilitation by means of a new boulevard.

As a result of policy and priority diversions following the 2014 general and municipal elections, it was decided to reinstate the railway connection of Tirana CBD from the PTT Terminal station till the point of the historic railway station, for the operation of the suburban railway, by means of rehabilitating the existing line and integrating the final section within the boulevard, along with a small terminal station for suburban trains.

The concept and preliminary design of the Tirana PTT to Tirana centre line was assigned as an extension to the initial contract between The Albanian MTI and JV RAILCON.

Prioritization of Investments between Railway Lines

The concept and preliminary design of the extension from Tirana PTT to Tirana centre featured :

Schematic design of alternative configurations of parallel and coordinated development of the Central City Suburban Railway Terminal, of its associated rail link and of the boulevard, mainlining to the extent possible the original concept of the boulevard development

Evaluation of the alternative configurations and selection of the preferred option, following involvement of the interested parties in the selection process

Elaboration of the preferred alternative layout of the Boulevard, the rail line and the Terminal Station configurations at feasibility – preliminary design stage, featuring :

Bills of Quantities and Cost Estimates 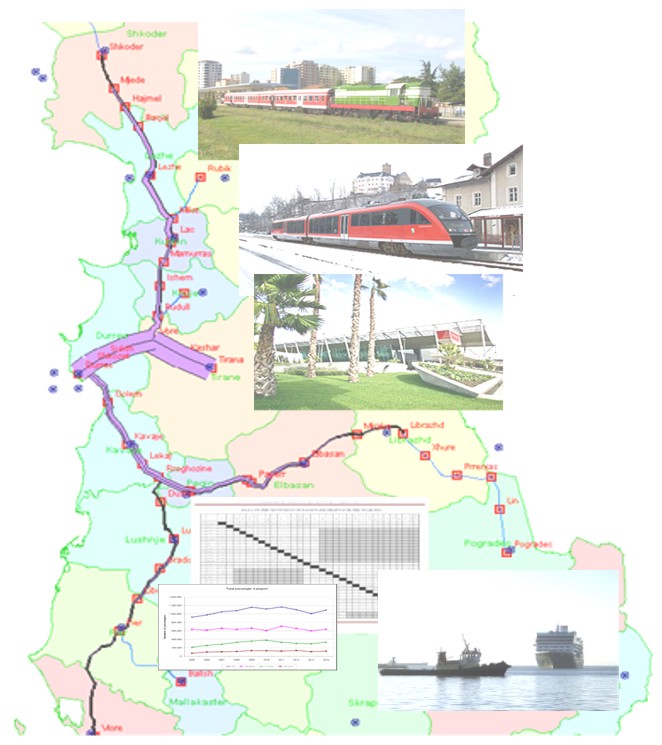